Here’s something I can’t resist.

And truly, it’s a great idea. Take a bow, Murray Thorn, for conceiving and putting together The Great Australian Songbook: a 40-track feast of this country’s most emblematic tunes, spread across two CDs housed in a slipcase featuring lyrics, photographs and images of period memorabilia. 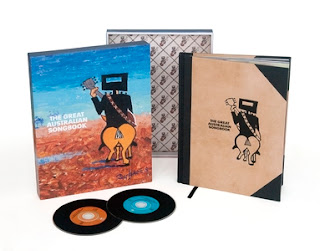 Then there’s the songs. Have a look at the list on the link above. I have no argument with many of them. You won’t hear me quibbling about the inclusion of the likes of Midnight Oil, the Church – well, most of the first disc actually. The second disc I can mostly live without. But of course I’m really just envious. I wish I’d done this first.

So I’ll do it second. In this here blog. Over the course of the next week, I’m going to give you my own personal top 40, with a short blurb on each. Some may even be in Thorn’s list too, because, well, he’s right, and I just can’t overlook them. Others will already have been acknowledged in APRA’s 2001 list.

But, put simply, there are too many other songs I’d like to see in here which aren’t. And too many tracks which I’d be quite gratified never to hear again. Whispering Jack, I’m looking at you.